Roger Moore had The Saint. Pierce Brosnan had Remington Steele. Daniel Craig had Layer Cake. Roles that proved they had what it takes to be Bond. If actor Michael Fassbender ever steps into 007’s shoes (which I completely agree is a long shot), I think many will look back at his work as Erik Lensherr/Magneto in the 2011 film X-men: First Class as his “audition” role.

There are two scenes in particular that give Fassbender a chance to demonstrate his Bond skill set. The first is set in a Swiss bank, where Erick, dressed in a grey 3-piece suit and speaking French, casually threatens a bank executive to extract information. Free dental work is involved.

The second scene is the focus of this post. In a remote pub at the foothills of the Argentinian Andes, Erick (a concentration camp survivor) confronts two ex-Nazis who worked for his nemesis during the war. I could waste a lot of words trying to describe the intensity of the scene. Instead, here’s a link where you can watch it and judge for yourself: X-men: First Class Magneto in Argentina.  If you were unable to see the clip, then you should at least know it ends with this:

What Erick/Magneto Wears In Argentina

X-men: First Class is set in the 1960’s, so I’ve no doubts the costume designer for the film, Sammy Sheldon, had some fun. But she kept Magneto’s look very clean and tailored throughout and is very open about the influence Connery’s Bond had on her designs (you can read her interview with GQ here). For the Argentina scene, she has him dressed in a light beige linen suit, a white johnny collar polo, and brown belt and loafers, topped off with a Panama hat and black, Wayfarer style sunglasses. Imagine it was Connery’s Bond walking through the streets of Tangier in SPECTRE and you start to get some idea of how cool this look is.

Alright, let’s find some affordable alternatives and get this look for ourselves!

Yep, Magneto wore a Johnny collar polo (the one without the buttons at the placket) a good four years before Bond donned one in SPECTRE. Magneto’s white shirt has a ribbed collar with longer points and a trim fit. The ribbed collar is actually harder to find today, but the slimmer fit is no problem.

It’s the same polo we listed as an option for Bond’s Tom Ford Johnny collar polo, but in white. Perry Ellis typically has some kind of 40% or 50% off deal going on, so the price could drop to around $15.00. And that’s a great deal. Although it’s a 52% cotton/48% polyester blend, the fabric doesn’t feel cheap and breathes well. The length of the collar points and other details also make it a very close match looks-wise. Make sure you buy the “knit” version of the polo; the fabric has a softer hand.

The Kingsley looks to have a softer collar construction than the Perry Ellis, so you might not get quite as much of that cool, spread collar 60s vibe. It’s 100% cotton and the description says it’s more of a classic fit. They’ve reduced the price from £50.00/$80.00.

More of a slim fit, and the fabric is 60% Pima cotton/40% polyester. The material doesn’t look as shear as the Reiss option, which I personally think is a good thing. Available at Amazon U.S.

Note: If you’re in the UK and can pop into Orlebar Brown, check out the Massey polo. Unfortunately, the only sizes they have left online are extra small and XXL. I did think about including either the Felix (£75.00) or the Airtex Weave Massey (£85.00). But, honestly, the fabric on both of them just looks too shear.

Eric/Magneto’s trousers are actually part of a complete suit, but he never does more than carry the jacket and hang it up. We’ll have a post on Bond’s tan linen suits coming up soon, so if that’s the route you want to go, it may be worth waiting to maximize your dollars/pounds. For now, we’re going to focus only on the pants.

As near as I can tell, the pants are a linen or linen blend in a light beige or natural color. They’re flat front and a trimmer, tappered fit with a higher rise (it was the style in the 1960s). The side pockets appear to be on the seam or slightly offset and there’s one rear pocket with a button closure.

Another alternative from Perry Ellis. Being suit pants, they have a higher rise. I’ve also seen these in-store and the color isn’t quite as light as it looks online. So you’ll still be a decent amount of contrast between the trousers and the white polo. As an added bonus, if you do want to pick up the complete suit they have the Very Slim Linen Suit Jacket on sale for $65.00. So that’s a complete suit for less than a hundred bucks.

Perhaps the color reads a little darker than Magneto’s trousers. But the fit looks good (“Savile Row Inspired” according to the product page).  The fabric is a 55% cotton/45% linen blend, and I honestly can’t tell from the pictures if these even have a back pocket.

Chester Barrie Elverton Plain Linen Trouser in Beige: on sale for £75.00 at House of Fraser

Finishing off the Look

If From Russia With Love had been set in South America, I’m pretty sure this is what Connery’s Bond would have worn. To finish off the look, we need the following ….

Unless you’re planning on visiting Panama soon, it’s hard to go wrong with choosing the Stetson Retro Straw Fedora for the hat. Currently $52.71 to $61.00 on Amazon U.S. with a 4.5 star rating.

For the shades, our own James Brosnan has already written an excellent post on the sunglasses of Sean Connery’s Bond. Personally, I think the Persol PO3048S in Black with Polarized Grey Lens is excellent value for the money. FramesDirect has them on sale for $191.58. But the truth is almost any Wayfarer shaped sunglasses will work.

There are nearly limitless options for a brown leather dress belt (if you don’t already have one). Going back to good ol’ Perry Ellis, the Timothy Leather Belt (on the left below) has the right color. And at $17.99 on sale, it’s definitely right price. Or Debenhams has the Hammond & Co by Patrick Grant Tan Leather Belt for £30.00.

I’ve watched this scene many times, and I’m almost 100% sure Magneto’s wearing a pair of darker brown leather loafers. If that’s the case, then like the belt, you’ve got plenty of choices. Something like the Johnston & Murphy Ainsworth Venetian in Mahogany, on sale for $99.99, would do the trick. And remember: we have no-show socks precisely because we want to wear shoes like this.

And that’s the X-men First Class Magneto in Argentina look! Remember, if you want more Bond you can find us on Facebook, Pinterest and Instagram. And if you have any suggestions for good alternatives, the comments are open below! 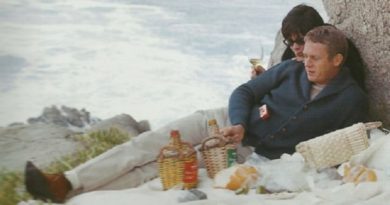 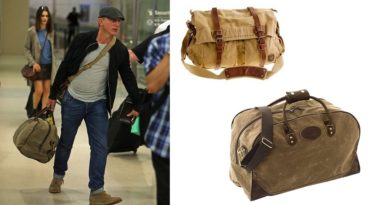 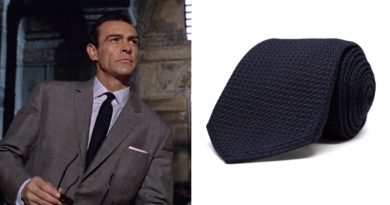