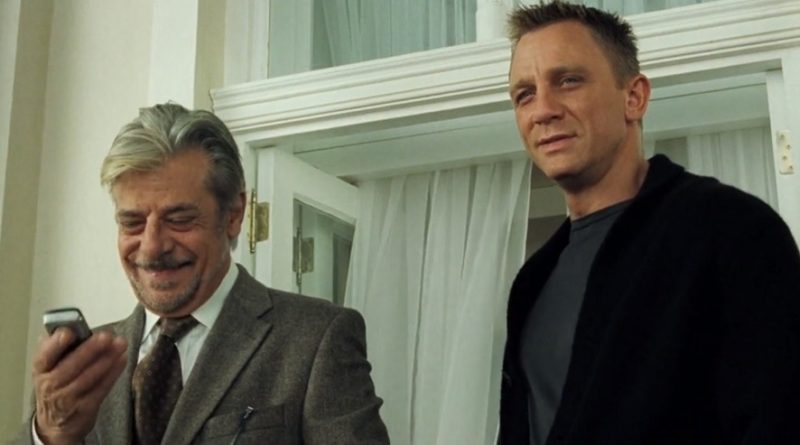 At Iconic Alternatives, we try to focus on affordable clothing that will help us get the Bond style we want without emptying our wallets. So it doesn’t make a whole lot of financial sense to invest in a piece and then only use it with one “screen accurate” look. Versatility is the name of the game. That’s where our “4 Ways to Wear It” series comes in. We take one piece of iconic Bond clothing and combine it with other affordable 007 inspired alternatives to extend our wardrobe and get the most bang for our buck. In this post we look at the James Bond black cardigan.

I’ve been waiting a looooong time to do this post. Some of you know the effort I’ve put into finding a decent affordable alternative for the James Bond black cardigan from Quantum of Solace. Hell, some of you guys are even more obsessed with finding one than I am! But for this “4 Ways to Wear It”, I’ll be using the Mango Shawl Collar Cashmere Cardigan, which is currently on sale for £79.99 on their outlet site (you’ll find more alternatives for the Tom Ford cardigan in this post). It’s missing the ribbed knit of the QoS Tom Ford. But it does come close to the cardigan Bond wore in Casino Royale. And that brings me to my theory …

My theory about the James Bond black cardigan

I completely understand that the actor Daniel Craig wore a different cardigan in each film. But I like to think that within the world of the films, the character James Bond only owns one black cardigan. In other words, the one from Casino Royale and the one from Quantum of Solace are supposed to be the same cardigan! The same way the navy blue Sunspel polo and the navy blue Tom Ford polo are supposed to be the same shirt. Or how 007’s supposed to be wearing the same suit at the start of QoS as he was wearing at the end of the CR. We – the audience, the fans, the collectors – can see the differences. But as far as Bond himself is concerned, he wore the same cardigan when he spoke with Mathis on that balcony in Montenegro and when he visited him at his villa in Italy. 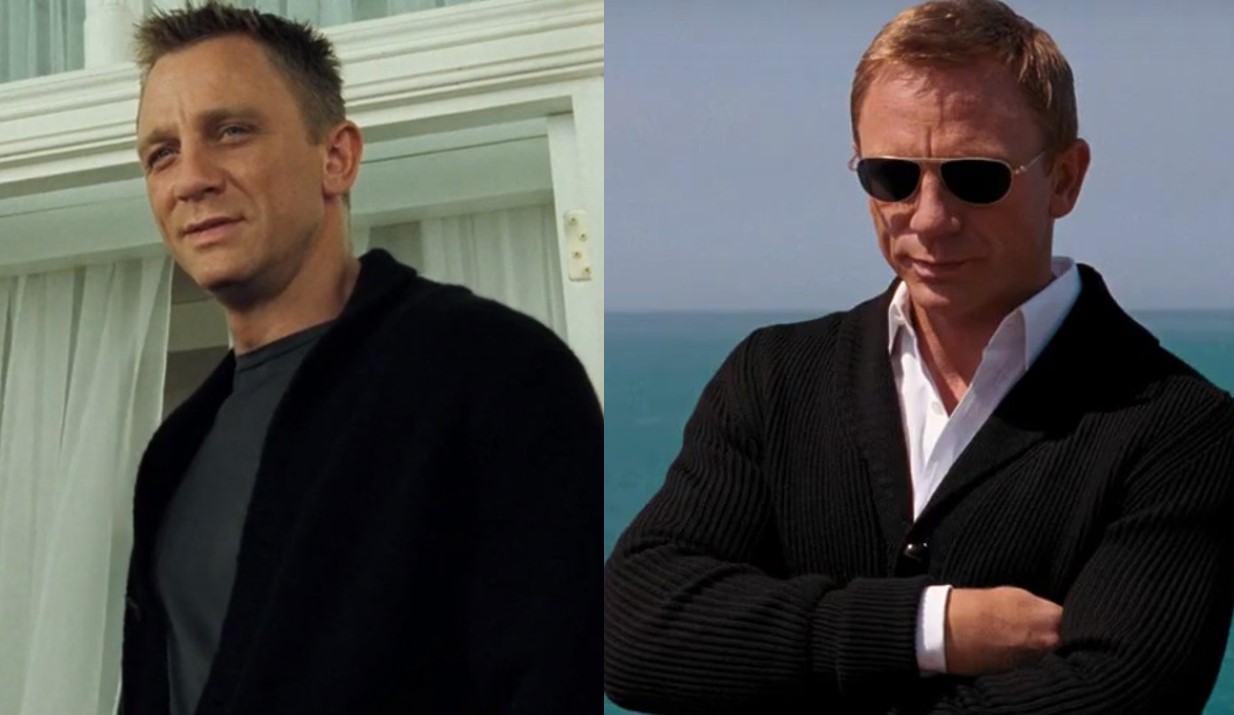 So why do I choose to believe this slightly-meta-possibly-overly-complicated theory? Well, one reason is it works with the continuity of the two films and their connected story and timeline. But mainly because it saves me from having to buy two black shawl collar cardigans. I’m practical that way. Okay, on to the fun stuff! We’ll be exploring three Bond looks in this post: the Montenegro balcony outfit from Casino Royale, the Venice yacht outfit from the end of the same film, and the outfit he wore to visit Mathis in Quantum of Solace. Plus we’ve added a mash-up look. 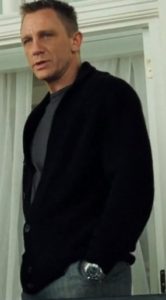 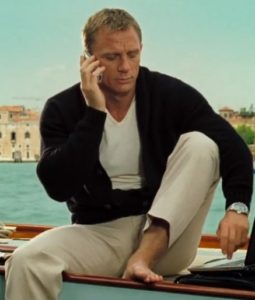 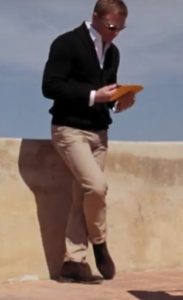 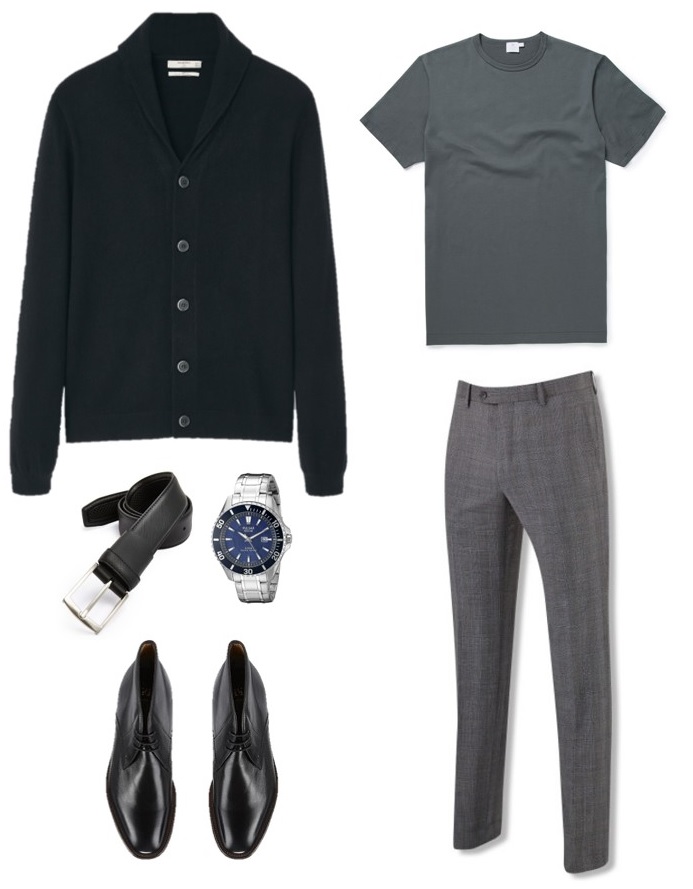 Let’s start with the pants. The actual pattern of Bond’s trousers was a Glen Urquhart check with a blue plaid overlay. But that’s an incredibly specific pattern to find a match for. The blue weave in these Savile Row Co. alternatives is more subtle than in the originals. But you can still notice it. If these aren’t doing it for you, you can check out the Richard James Mayfair Milled Prince of Wales Check Suit Trousers in Charcoal, on sale for £87.50 at John Lewis. The blue pattern is definitely more prominent on those.

Moving on to the t-shirt. Yes, I used the original Sunspel. And yes, it’s crazy expensive for a t-shirt (although very nice by most reports!). Let’s be honest. It ain’t that difficult to find a dark grey t-shirt. Here’s a Fruit of the Loom option you can pick up at Amazon for about three bucks. As for the rest. We never see Bond’s belt during the balcony scene (I’m not sure he’s even wearing one). But a Prada style black leather belt will work well here.

We also never see his shoes in this scene. Some AJB007 forum members have said they like using black suede chukkas or desert boots to complete the look. But I’m assuming Bond’s wearing the John Lobb’s here since he wore them with the same trousers in M’s flat earlier in the film. Barneys has the newer John Lobb Romsey II chukkas if you want to compare them to the alternatives from M&S. And they’re only $1495.00! And lastly, the watch. The hands, indices and bezel on the Pulsar are different from the original Omega. But the face does have the Seamaster 2220.80.00’s wave pattern. Which is not that common a feature. It’s not perfect watch. But it also costs less than $90. 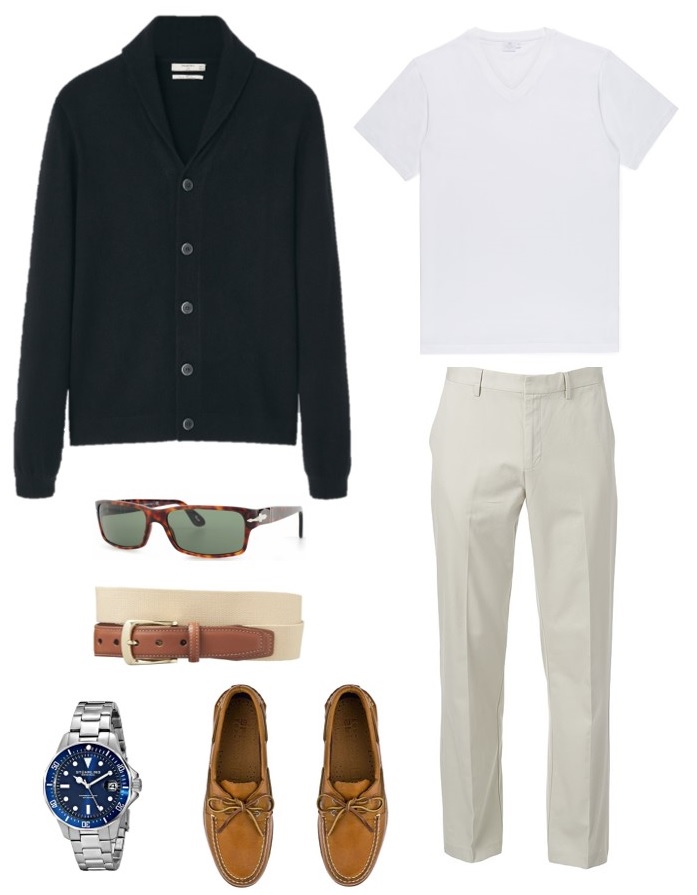 James Bond’s on a boat! And warning: the language in that video is really NSFW.

Beginning with the obvious: Bond does not wear shoes in this scene. But since he is on a yacht, boat shoes seem like an obvious choice. Unless, of course, you prefer to go SA and barefoot – you damn, dirty hippy, you!

Again, we don’t see Bond’s belt or know if he’s wearing one. But the classic surcingle seems like a good match for the casual feel of the outfit and was a favorite of Roger Moore’s 007. The Persol sunglasses are alternatives for the 2720s Bond wore during the Montenegro section of the film. And if the v-neck t-shirt from Sunspel is a little too expensive for you, then $14.00 will get you a 6 pack of Fruit of Looms at Amazon. The trick is making sure the V doesn’t dive too deep, leaving your chest hair at the mercy of the sea gods. The Sturhling alternative for the Seamaster 2220.80.00 has indices and a scalloped bezel that come closer to the Omega than we saw on the Pulsar. The one shown above is the 39mm model. 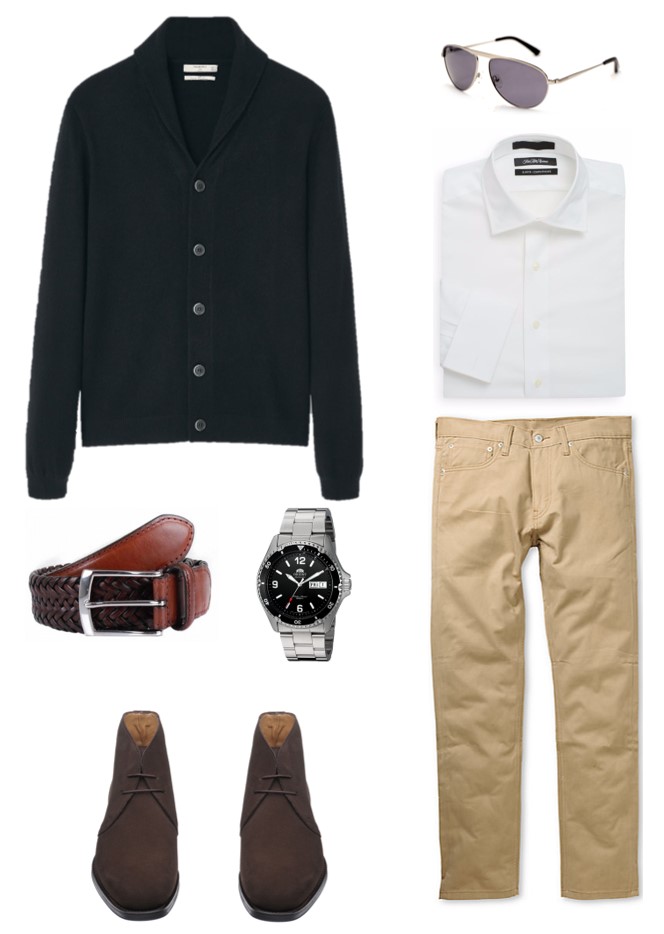 Really, what more is there to say about this look? It’s a classic. And it’s inspired many of us to keep hunting for the perfect affordable black, shawl collar cardigan since we first saw QoS. I guess the only things to note in this look are the sunglasses and the watch. For those of you that aren’t members of the Bond fan forum AJB007, you should know that Magnoli Clothiers has undertaken the FT108 replica project at the request of the community there. At an estimated $80, they’re going to be an incredible deal and well worth the wait.

Now to the watch. I’m not sure when it happened, but Orient now has itself quite the fan club. And the 41mm Mako II is definitely a favorite. It has Orient’s in-house Japanese F6922 automatic movement and is also one of the few black face dive watches that uses numerals at 12, 6 and 9 o’clock.

Casual in Black and White 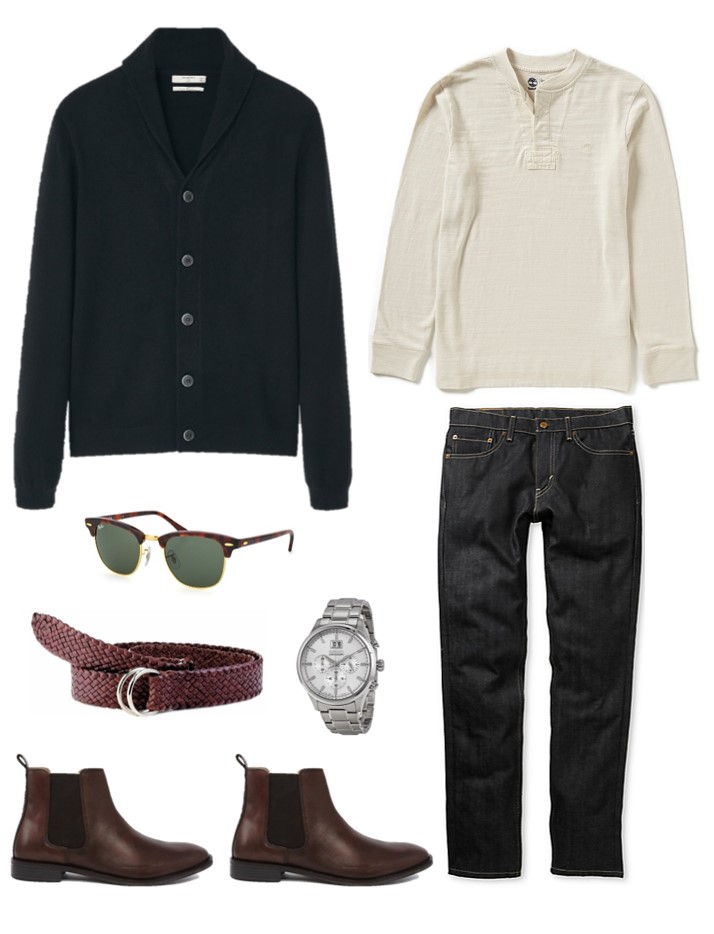 Here’s where we mix things up. The Timberland Henley isn’t an exact match for the All Saints Henley Bond wore under his N.Peal sweater in Scotland. That one definitely had a real “Gold Rush Miner” vibe going on. But this alternative does have bib style stitching around the placket. So it’s more interesting than your basic, everyday white Henley. The rest of the look is pretty straight forward. Even though most of the outfit’s elements are fairly dark, the blend of textures keeps it visually engaging. And the typical “rugged guy” combo of sweater, jeans and Chelseas is balanced by the more sophisticated sunglasses and watch. Oh, a note about the watch: it’s a BIG 46mm. We share some smaller options in the post on alternatives for the Rolex.

Got some favorite ways to mix and match your James Bond black cardigan? Leave suggestions in the comments below! Or, if you’re feeling really sociable, you can email us a picture at info@iconicalternatives.com and we’ll post it in our Gallery! 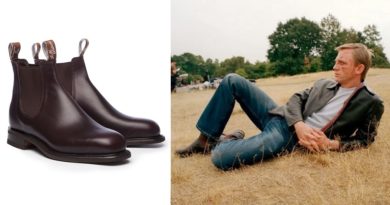 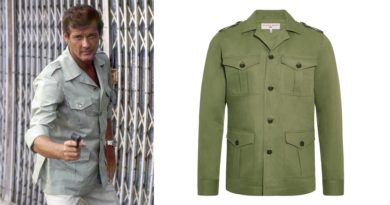